New for 2013 is a total redesign for the Nissan Pathfinder. There isn’t much which has been left unchanged. There is a higher tech interior, a more utilitarian exterior and a more responsive transmission.

The cabin of the 2013 Nissan Pathfinder has Best in Class front headroom, legroom and class-exclusive reclining 3rd-row seats are standard. With this extra space you will also enjoy a lot of storage options such as 8 cup holders, extra large glove compartment, fold-flat seating and other cubbies. 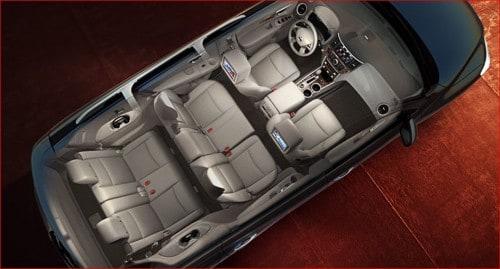 The outer appearance of the 2013 Nissan Pathfinder is completely different. The headlamps are more angular and there is more chrome for a modern and fresh look. The rear end has totally changed from a more square style to a rounded look with sleek contours. The taillights are now rectangular and wrap-around the sides.

The new Continuously Variable Transmission eliminates gears by using a precisely machined metal belt instead of traditional fixed metal gears, which transfers power from the engine to the wheels far more effectively and smoothly. Shifting is like slicing a knife through butter.

The new 2013 Nissan Pathfinder has a new look and a new engine which is sure to please Pathfinder lovers. Out with the old and in with the new for 2013. Stop by your local Calgary Nissan Dealer-Royal Oak Nissan to test drive this redesigned SUV.